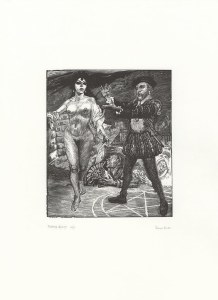 Simon Brett
Defining Beauty
Wood engraving, 2019
180 × 152mm
Simon was born in Windsor in 1943. He was brought up in London, educated in Yorkshire at Ampleforth College and learned wood engraving from Clifford Webb at Saint Martin's School of Art, London, where he studied principally as a painter (1960-64). Still thinking of himself as a painter, he travelled to New Mexico, Denmark and Provence (1965-70). Between 1971 and 1989, while teaching at Marlborough College Art School in Wiltshire, he moved from painting to engraving. Between 1981 and 1988, he published books under his own Paulinus Press imprint, winning the Francis Williams Illustration Award (National Book League/Victoria and Albert Museum) for the first of them, The Animals of Saint Gregory, in 1981. Since 1989 he has worked as a self-employed artist, commission's include illustrations for The Folio Society, such classic titles as Clarissa, Jane Eyre, The Confessions of Saint Augustine, The Folio Golden Treasury, Middlemarch, the poetry of Keats, Shelley and Byron, The Meditations of Marcus Aurelius, and The Legends of the Ring and of The Grail.
With Barbarian Press of British Columbia he co-produced one of the major fine print books of the century to date, an edition of Shakespeare's Pericles which aimed to 'stage the play on the page' by means of some 98 images on over 140 blocks. He also writes regularly and probably too much about wood engraving. In 2013 a retrospective exhibition An Engraver's Progress: Simon Brett - Fifty Years of Wood Engraving was seen at the Bankside Gallery London, in Oxford and at the Holburne Museum, Bath with a substantial accompanying catalogue. At the same time, Barbarian Press devoted the fourth of their Endgrain Editions monographs to Simon's work, with over a hundred engravings printed directly from the original blocks.
It is almost impossible to write sense about a just-completed work. the first idea has been altered by contact with the material and by the limits of the one's skills, producing a new reality which cannot yet be seen for what it is. As the design becomes clearer, it gets tailored to fit one of the blocks on the shelf, unless a new block is to be ordered. For this project I chose an old, inherited block. It is made of just two pieces of box, implying an original log of some 7 inches in diameter, which in turn implies considerable age; boxwood of that size was eliminated by the nineteenth-century use of the wood.
The block might have been made in Thomas Sturge Moore's own time. It has been planed down and resurfaced; you can see traces of its first usage on the back, shadowy figures and trees. I judged the wood to be of a good quality and consistent. I was wrong, it turned out to have hardened with time and in places to be positively resistant, grisly, resulting in skids and slippages. Moore appears as one of the groundlings in Edward Alleyn's theatre, and self-appointed helmet-bearer, not here to Aphrodite but to Helen of Troy. The most beautiful woman in the world is conjured up. Faustus greets her. "Was this the face that launched a thousand ships…." 'How define "Beauty"?', Moore wrote, '…It is perhaps most safely classed as indefinable, like blue and red…We merely name these sensations.' This was one of Moore's central beliefs: that we should trust our instinct for beauty, rather than try to explain it away biologically or sociologically - refine it and educate it, but trust it. This is the link I sensed between his Aesthetic Movement position and Ned Alleyn, founder of the College of God's Gift and creator of the role of Faustus - the idea of beauty as a given. John Aubrey, however, says that Alleyn's acting brought the Devil himself onto the stage and that it was atonement for this that prompted his charitable gifts. Certainly reconciling the benevolent smile in the likeness we have of him with the lust and gibbering terror he must have created in the role of Faustus was the most difficult part of my engraving. The area had to be drilled out and plugged three times. It is battle-scarred and it shows.