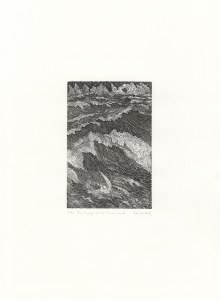 Sue Scullard
The Voyage of the
James Caird
Wood engraving, 2019
153 × 103mm
Sue was first introduced to wood engraving by Yvonne Skargon at the Royal College of Art 33 years ago. Already a keen user of pen and ink, she became enthralled by the variety and sparkling richness of line, pattern and texture offered by engraving, and by the pleasure of cutting marks into such a beautiful smooth surface. This enthusiasm for the decorative qualities of the medium has remained with her through 30 years of projects, commissions, freelance illustration and self-generated printmaking. Her engravings are often made for the pleasure of exploring her own favourite themes: landscape, including mountains, rivers, coasts, and woodland; gardens; and traditional architecture, to the extent that she visualises any inspiring places as potential engravings. She looks for subjects with potential for a dramatic composition, and enjoys rendering the diverse shapes of flower and foliage in a garden border, or rocks, waves, splashes, waterfalls, and snowflakes, trying to capture their essence in a series of graphic marks on a dark ground. She has also found engraving to be the ideal art form for a short-sighted artist. Most of the engravings are worked on small endgrain boxwood blocks, which have a dense and close-grained surface, so the medium encourages a cautious and detailed approach. Mistakes cannot be reversed - once a mark has been engraved it cannot be filled in again. An uncut block would print as a solid black area, and the fine tools incise white marks into the black surface, and as with other relief printing methods like lino and woodcut the raised areas are then inked and printed, which gives the engraving its characteristic appearance. Sue now prints her engravings on a Victorian Albion press, inherited from her mentor Yvonne, but for many years she hand-burnished them with an old spoon. She has engraved illustrations for Folio Society books over the years, including The Lives of the Later Caesars; Walter Scott's, The Bride of Lammermoor, Flora Thompson's Lark Rise to Candleford, some Shakespeare plays, and endpapers for Chaucer's Canterbury Tales.
Sue has been a member of the Society of Wood Engravers for 30 years, exhibiting every year, and in 2012 she was awarded the first Bewick Society prize. She is a member of the Sussex Guild, showing her engravings at selected craft events, and has taken part in group exhibitions such as the annual 'Florum' botanical show. She has demonstrated engraving at Art in Action and Craft in Focus events, and as a regular participant in South East Open Studios over the years.
Statement
The Voyage of the James Caird For years I have been fascinated by Shackleton's story of the Endurance Expedition to the Antarctic and his amazing boat journey in the lifeboat, the 'James Caird' in a desperate mission to find help to rescue the ship's survivors in 1916. When I was invited to take part in this exhibition to celebrate the 400th anniversary of Dulwich College to create an engraving inspired by the College's heritage, I was delighted to have the opportunity to visit this remarkable boat, which is beautifully displayed and I was inspired to illustrate the most dramatic part of its story. I was struck by the small size of the James Caird, in which six men survived a voyage of 870 miles in 17 days of constant danger through the most mountainous seas in the world, under hurricane force winds, setting off from Elephant Island on the edge of the ice pack, aiming for South Georgia, with a very slender hope of reaching their destination. At Dulwich I was impressed by a painting which shows this journey, An Epic of the Sea, by the marine painter Norman Wilkinson, and I found this an invaluable inspiration and resource while I was working on my engraving. I was also aware of Hokusai's woodcut of the Great Wave, which has long been a favourite work of art.