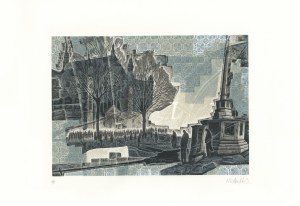 Neil Bousfield
Leslie Paton: Memory and Places
Wood engraving, 2019
245 × 345mm
Neil is a British artist working in relief printmaking and contemporary wood engraving. His practice explores landscape narrative and the concepts of transformation, change, and palimpsest of geography, time and place. His engravings are realised from drawings made on location - recent works are made in response to the environmental and geological narratives of the North Norfolk coast and the Broads National Park, providing a visual and historical record of these vulnerable locations. Bousfield studied at Bristol's University of the West of England where he gained a Master of Arts degree in Multi-Disciplinary Printmaking, awarded with distinction in 2007. Born in Middlesbrough, England, Bousfield grew up in the coastal village of Marske-by-the- Sea, in North Yorkshire, and now lives and works on the North Norfolk coast. He is an elected member of the Society of Wood Engravers and a fellow of the Royal Society of Painter-Printmakers. Work is held within major public collections including the National Art Library, Victoria and Albert Museum, London, the Ashmolean Museum, Oxford, and MMU Special Collections, Manchester, and in private collections around the world including Australia, France, USA, Canada and the UK. Bousfield exhibits worldwide including at the Royal Academy of Arts Summer Exhibition, London.
My work is particularly focused around the ideas and approaches to 'place' and 'place making' and how experiential narrative and historical narrative can impact upon the process. Before visiting the College I had completed a set of engravings, commissioned by the Folio Society involving making work inspired by the poems of WW1 soldier-poet, Wilfred Owen, and the research I carried out into the places Owen was posted. This was playing on my mind during my visit to the College married with how the boys spoke about the History project which involved researching a name upon the war memorial. This space also seemed to resonate, and the placing of the memorial within the setting of the College where so many young people start to shape their lives seemed particularly poignant.
The work I made focuses upon this particular aspect of the College and the patterns are from drawings I made of the floor within the main buildings. As part of my research I drew inspiration from Leslie Paton who left Dulwich College for Sandhurst, and became a Second Lieutenant in the Royal Scots. He joined his regiment and was sent to France in February 1917; a few weeks later he was killed leading an attack on the German lines near Arras at the age of 19. I used maps of where he lived and maps of the front lines and trenches where he fought within the overall design and the development of the work.