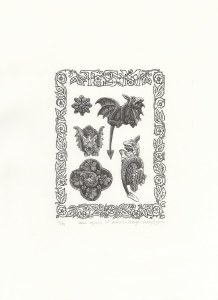 Andy was born in Norfolk and now lives in rural Cambridgeshire, Andy English is a professional wood engraver who has illustrated many books, notably for the Barbarian Press of British Columbia inm Canada. He has engraved stamps for Royal Mail, and is in demand as an engraver of pictorial bookplates. Andy's personal work frequently features gardens or the English landscape, often with wildlife as a prominent part of the design. He describes his work as small, detailed, rural and often autobiographical. His work is held in the collections of The British Library, The Ashmolean Museum, The Victoria and Albert Museum, The Garden Museum and the Yale Center for British Arts.
Statement
I first became familiar with Thomas Sturge Moore's work through his association with Lucien and Esther Pissarro's Eragny Press. However, I now realise that his rather individual wood engravings decorate several other volumes in my bookcase. So, knowing him as an illustrator, writer and editor, I wanted my wood engraving to have something of a bookish flavour. As I toured the College, I was struck by the number of mythical and real creatures that I saw, including dragons, wyverns, lion masks and a penguin. In the end, it was the wyverns, carved in stone on the walls of the Barry Buildings, that took my fancy, and I prepared drawings of them. I decided to give the image an engraved border. I based it on one designed by Lucien and engraved by Esther Pissarro that was used in some Eragny Press books, including one that Thomas Sturge Moore illustrated. The initials woven into the upper border were also based on Eragny examples. The border and wyverns (I was careful that none should have more than two visible legs) were engraved on a single endgrain block of pearwood. I aimed for the appearance of a leaf from an imaginary Edwardian book. For me, this is a large engraving. To help me compose the image, I added a carved stone boss and uncurled the tail of one of the wyverns.