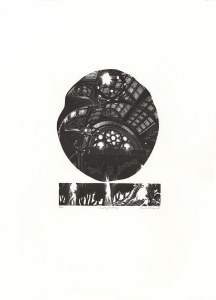 Anne Desmet RA
Anne was born and brought up in Liverpool. She has BFA and MA degrees in Fine Art from Oxford University, a Postgraduate Diploma in Printmaking from Central School of Art, London, and in 2018 she was elected an Honorary Fellow of Worcester College, Oxford University, for 'distinction in the world of art'. She exhibits her wood engravings, linocuts and printed collages widely, has won over 40 national and international awards and has works in major public and private collections worldwide. The Ashmolean Museum, Oxford, and the Whitworth Art Gallery, Manchester, have significant holdings of her works. Over 30 solo shows include two major museum retrospectives (and ensuing tours) at the Ashmolean (1998) and the Whitworth (2008). Desmet is author of five published books on printmaking and drawing, and was editor of Printmaking Today magazine from 1998-2013. She is only the third wood engraver ever elected to membership of the Royal Academy of Arts (RA) in its 251-year history. She lives and works in London and is currently curating an exhibition celebrating 100 years of the art of wood engraving, to be held at the Ashmolean Museum in March 2020.
Statement
The upper section of my work depicts the elaborate carved and painted medievalstyle, hammerbeam ceiling of the College's Great Hall with its church-like traceried windows, designed by Charles Barry Junior (between 1866 and 1870). I was inspired by the complexities of the Hall's curving forms and by the contrasts of sparkling illumination from its pendant lights and from the sunshine catching the window apertures set against areas of deep shadow and dark carved-wood motifs. Here in the focal heart of the College where generations of staff and students have regularly assembled, architecture is, in itself, both inspirational and uplifting. I engraved the image on a natural roundel of polished end-grain boxwood, designing my composition to complement and to fit within the roughly circular form of the wood block. A second, rectangular-shaped engraved and printed boxwood block completes the composition. This recreates a detail of an engraving of trees by Thomas Sturge Moore. A re-envisioning of Sturge Moore's trees, set beneath an image of the Great Hall and seeming to grow up into the hall itself, into the area of the raised stage, suggests the ancient foundations of Dulwich College upon which is balanced a glimpse of one of its most iconic present-day architectural structures. Together, the two interconnected images are intended to evoke a sense of 'Living History' alluding to the College's illustrious past in Sturge Moore, as well as to its current life and ongoing potential for growth and development.