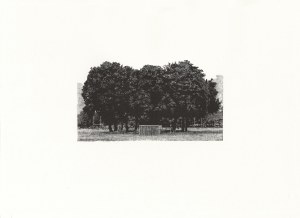 Gaylord Schanilec
The Clump
Wood engraving, 2019
100 × 176mm
Gaylord is an American wood engraver, writer, printer, designer and illustrator and the proprietor of the press Midnight Paper Sales, located in Stockholm, Wisconsin. Schanilec uses traditional wood engraving processes to create illustrations for hundreds of works. He is internationally renowned for his colour engravings, letterpress printing, and handmade books, Gaylord has often focused his attention on the wildlife, landscape, and culture of the upper Mississippi. Gaylord has been printing books since 1980, and engraving wood since 1985. Four years ago he acquired a very special tool - a multi-line tool of the finest line width that had been employed at a 19th-century wood engraving firm in Chicago. The tool rested magically in his hand, and he set out to learn to use it. As he holds it, he believes he is in touch with its former owner who, judging by the patina of the wooden handle, must have loved it as much as Gaylord does.
Statement
My work tends to employ the natural world, and when I visited Dulwich last year I came away with two dominant impressions: the obviously beloved 'clump' of stately trees at the centre of the playing field at Dulwich, and something my host (Sue Mulholland) said about boys 'falling over themselves'. My original vision was to place the falling-over boys in the foreground, with the trees in the back, but this did not happen. Instead, the boys are very small beneath the stately trees, as they probably should be. Perched on a dead branch on the right-hand shoulder of the clump is a bird. It was my intention this be a crow, as one was there during his visit. Instead, the bird became a dove and the 'falling over boys' landed in a poem: Sober snow sweeps through the canyon irretrievable boys falling over nothing but themselves like lambs, like walking sticks colorless cartwheels desperate and vivid souls turning toward inevitable white.